Kashindi: 1. Welcome to Namambe please tell us how many languages do you speak? If it’s about speaking I would say Four. Fluent Oshiwambo (most of the dialects), reasonable English, acceptable Afrikaans and broken Otjiherero. I can also understand (not speak) a little bit of German but at the most basic of it. 2. Lovely, […] 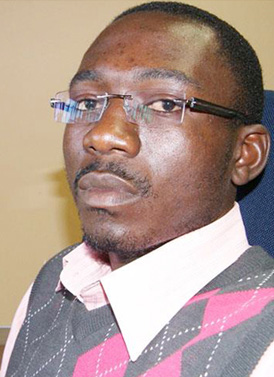 1. Welcome to Namambe please tell us how many languages do you speak?
If it’s about speaking I would say Four. Fluent Oshiwambo (most of the dialects), reasonable English, acceptable Afrikaans and broken Otjiherero. I can also understand (not speak) a little bit of German but at the most basic of it.

2. Lovely, please tell us now about yourself?
My name is Onesmus Shigwedha, at home they call me Shaanika. I don’t know what any of those names means…I doubt if my dad knows too. I was born and bred in a small village called Okapuku in Ombaanhu, together with a sister and two brothers. I’m not only a son to someone, but also a father to someone. I am a simple but sometimes not-so-easy to understand village boy. Adults find me too quiet, my peers find me too loud. Sometimes I get a bit surprised by the character I display to different people, as many a times people say I look “suspicious”. I remember getting out of a shop in Town Square with a group of friends and I was the only one stopped to be searched…embarrassing!…Having grown up with only one sister, it is obvious that all household chores (feminine and masculine – as they were/are categorized) are well known to me. Siyo opaife poshini kapena ngu ta fii nge po.

3. Where did you go to school?
After finishing my primary education at Nakayale Primary School, I went on to complete my grade 9 and 10 at Anamulenge Junior Secondary School – now called Canisianum High School. Thereafter I went so Ruacana Secondary to complete the senior secondary phase of my education. Here is where I met naughty classmates like Naambo Shooya and Sunday Shipushu (Sunnyboy). I did not take school seriously. School for me was something I go to just because everybody else was going, and I had to pass because my parents condemn failure. That is why I did not pass Grade12 with flying colours. Gracefully, I pulled through though. After high school I went to the University of Namibia, where I thought bachelors of Science and Education were the only qualifications there. At registration I learned of a BA Tourism degree, which I eventually registered thinking I was going to be touring planet earth for the rest of my life – how wrong I was…yes I am from Okapuku. I completed, worked here and there while in the process completing a post-graduate diploma in Education…yes I am a qualified teacher

3. What do you do for a living?
I work as a local economic development and tourism officer at Okahao Town Council, which involves expanding the town’s economy through among others creating a conducive business environment. about the photos i will see if i have some, if not, then you may use the facebook ones

4. Who is your role model in Namibia?
If a role model is what I understand it to be, my father, Embula lya Aiyela is the one. With close to zero education, he managed to be (i believe) the best that he can be. He taught us; by his own example to be satisfied with what we have. This is one humble guy that I salute. A very understanding and tolerant man who is able to take bad treatment from those who take advantage of his personality. “Kashi na sha, Oinima kayi na nghyi hayi ningi” he taught us. He does not quarrel on us but advises us. I wish I had his inner character. To me, he is second to none.

5. What do you enjoy most in Namibia?
Number one is just the peace and stability. I look at other countries and see how people expect to be killed any day and every day. I also enjoy the politics in general. If I start with this one I won’t finish, but the political dramas are very enjoyable to a spectator like me.

6. If we take you back to secondary school this year to repeat Grade 11 and 12 what would you do differently to excel?
Mekemeke I will hammer both those grades hands down. Just take me back to grade 8 nokuli so I can have a better warm up. As far as school and studying is concerned, I did most of the things wrongly. I still remember in the year 2000 when I wrote the Development studies examination; a friend had to tell me that people have started already. I was busy playing soccer with the grade 11 learners (and i’m even the worst soccer player in Namibia). I will do everything differently if I go back to school, Everything.

7. What is your favourite car?
I have a favorite car on each make of German cars. Mercedes- E63, BMW- X6 M, Volkswagen- Golf 6 R32, Audi – A7. Please don’t ask me which one I drive because I only saw them with my eyes.

8. Give us two towns in Namibia that you like the most.
Ongwediva and Okahandja

9. If you are given a choice to become a Regional Council, which constituency in Omusati would you choose to manage and what are you going to change first?
I would take Ogongo Constituency and start with food production. People are hungry but some of our politicians are playing with people’s tummies. Cooperatives should be formed even in rural areas. Government provides water, equipments and training so that people can produce surpluses.

10. Which country in Africa is manufacturing its own cars and engines?
I really don’t know

12. What should be done to reduce cases of domestic violence in Nambia?
That is a very serious problem that not even heavy prison terms will solve. Unfortunately (in my view), the solution lies almost entirely on the willingness of those involved to reduce it. Maybe reduction should start with the way we raise our children, which will obviously take a while

13. If you are given one million Namibian dollars as a gift today what are you going to with it?
That’s a tough question for a young father from the village. First of all everybody will hate me for not giving them a share, because I won’t, haha. One thing for sure is that I will divide the money in half, resign and go to school, taking with me one disadvantaged student to university. I still have revenge towards school. Upon completion, I will invest the remaining half in something that will be able to pay my children’s school fees.

14. Do you have any other thing that you would like to share with us?
Education remains the biggest concern to me. Enough with the noise about teachers, we all know where the real problems are. Real problems are not in the schools, but in society in general. For example, who wants to tell me that they don’t know about the impact of the fast changing world on education? The world is fast changing especially when it comes to this monster called technology. It is technology that increases alcohol production, making drugs trading and access easier, making pornography accessible, technology is unfortunately one of the good fertilizers to all agents of moral decay. That expects us to also align our education systems in a proactive manner to the fast changing world of technology. There is no way we can stop the changes, but we can use them as means of learning. Simple example of my line of thinking: In the near future if we know that the majority if not all learners spend most of their time on the internet, maybe we can think of devising ways of making the internet a learning resource centre so that learners get notes, exercises and homework on the internet? I think one day the future will dictate that we do things that way.

Thank you Namtranslations for the innovation.