Kashindi: 1. Please tell us about yourself. I am full Namibian, born and bred at a small rural village in Oshikoto region more than a quarter of a century ago. I grew up in a typical rural life looking after livestock, fetching water on my head and hewing wood. I am from the Christian family […] 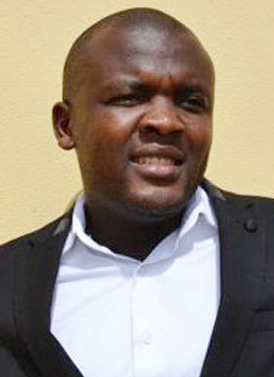 1. Please tell us about yourself.

I am full Namibian, born and bred at a small rural village in Oshikoto region more than a quarter of a century ago. I grew up in a typical rural life looking after livestock, fetching water on my head and hewing wood. I am from the Christian family and have been very active in the Sunday school in the early 1990’s, and was an obedient child at school, teachers loved me. For now, I am a professional journalist and my mission is to make sure that people understand the environment they are living in. I am very focused and know very well what I want in life.

2. Where did you attend your school?

I attended many schools but I started my Primary at Engoyi Primary School until Grade 7, then moved to Ondjamba Combined school, Onathinge South Combined School, Nehale Senior Secondary School then the University of Namibia from where I graduated 2006.

I am perhaps one of the easily recognizable faces at the NBC. Some people I meet in the streets call me a News Anchor but I am not an Anchor anymore. For years I have been presenting News in Oshiwambo for television, but now I am just a News Reporter. Of course people now see me on their television screens when I am doing what we call piece-to-camera or stand upper, but an Anchor is the person who presents the bulletin to the viewers, like my colleague Franlin Thomas and others.
As a News Reporter my duty is basically what it says reporting for news. I go around to gather information and write stories for both radio and television. My areas of specialization at NBC are Politics and Education, however in some cases I also do other beats. I love reporting on community affairs, human interest stories because they involve people and can have a great impact on their lives.

4. What do you enjoy doing on a rainy day?

As a journalist, my life is so busy that even on rainy days I found myself on duty. Most of the times when it is raining you would hear people saying “it is a baby making weather”, I guess such moments do not apply to my life. However, I would like to just lie on my bed with open curtains and sleep or just relax while listening to the sound of the rain with my cup of coffee.

5. Do you prefer Tafel Lager or Windhoek Lager?

6. Name one of your FaceBook friends that you would love to have dinner with?

7. Do you know how to drop an egg onto a concrete floor without cracking it? If so please explain?

Hmmm I am not really sure of what you mean, because dropping an egg on a concrete floor, could lead to absolute cracking. But if you want to ask if I can do the impossible then yes I can. I have learned that in life no task is impossible to do until you try.

I would like to be a Land Rover Discovery, they are strong, stylish and sexy with off-road capabilities. I have not yet driven that car, but just by looking at its design elements I believe it is a comfortable car with the power to do the impossible both on the road and off the road. The Discovery was introduced in the UK in 1989, but even when you look at its first version today it remains an attractive car to be driven by young dudes like me. I think it is resistant to rust and rot over a long period of time and I so much envy those driving it today.

9. What do you like watching the most on television?

Isn’t that just obvious? I am a news man and to be honest with you I watch lots of news on television, switching from one channel to another. It gives me a sense of understanding of the world we are living in and of course I also try to learn from the best journalists on how they are covering certain issues. I get really mad when watching a well presented story by a Reporter with confidence, he kala nda nyanyukwa just imagining myself doing it. My family always laugh at me when I watch a story with undivided attention and the end go on like Hmmmmm…

10. Who’s played the most influential part in your life?

My parents. The fact that they were able to raise up a big family we are with so little resources. My mother was a sole bread winner as a school teacher before independence. She worked for ten years but her qualification was faced out of the system in 1989. She never received her pension though, I think they were cheated by the officials at the time because it was during the transition period.  In 1992 until 2003 she worked as a Literacy Promoter earning about 800 dollars per month. But I am telling you, that woman always made sure that there was bread on the table. We always had our school uniforms, stationeries and even when we go to church, we always get pocket money to buy fat cakes, fried fish (ohi ya kangwa yi na okafoondola) and sweet aid (okulu/okasweeta) a privilege that many children with employed parents do not have. When I was at University I had a monthly allowance of N$150.00, many people might not believe it, but it is true and it kept me going. And there were still my young siblings who were in schools under their support. It is this kind of life that made me who I am today. I had difficult times at university in terms of pocket money but with my parents’ support, their words of encouragement were always a pillar of strength and in my third year I got a part time job at NBC as a News Translator and Presenter. My parents are turning 40 years in marriage next month and they are still madly in love with each other as old as they are. They always call each other Tate and Meme just like us children and I find it sweet and classic. I would like to be just like them.

I love beautiful women in and out. She must be witty, intelligent and educated. A girl who knows her purpose in life, understanding and civilized. My girl must present an original physical appearance with no make-ups (ohawu nika wo ohawu ya ningi ya kale ya fa uululi). She must just maintain her original look like that of Iyaloo Nambala with hair combed backward and falling on the shoulders.

To reduce inequalities within the societies. It is saddening that Namibia with so much natural resources has the biggest gap between the rich and the poor in the world and I think our national leaders are still owing it to the people that until this problem is rectified in our lifetime. People are in need of land, and also need to get shares from the natural resources that are being mined here.

Yes I do. I believe God exists and I pray to him every day.

14. What is the most difficult part of being a journalist?

The fact that you have Editors, they are just difficult to please and some of them can mess up with your story. But it is also difficult to work in an organization where finances are a grave concern, you just cannot do what you want to do. However I still believe journalism remains one of the top and amazing profession in life.

15. Mention one of the tradional villages that has a website in Namibia?

I do not know any at the moment. However, I think I have heard or read of a project like that somewhere in Ombalantu where Kashindi Ausiku is involved. I can’t remember if it was a plan or something already implemented. It could be a great idea though, just imagine Oshikulu.com where you find also the pictures of the people who lived in your village before your time, it would be lovely.

16. What do you want to tell the young people in this country?

Young people need to take note that their future is in their own hands. Life can be easy only when you are living under your parents care, basically when you are under age, but after 21 you will have to pilot your own plane. They need to study and work hard to avoid living a regrettable life when they grow up.

17. Please take a wild guess do you think the next Prime Minister of the Republic of Namibia would be a woman or man?

18. Finally I noticed that both your first name (Tonateni) and surname (Shidhudhu) are of African origin how did you manage to get this right and how do you feel about it? And do you perhaps know what they mean in English?

This is an interesting question indeed. I am not so much into Western names or Christian names as they call them sometimes. I have three names in my ID in addition to my surname of which the first name is Western but I would not tell you what it is because I don’t like it. I am in the process of deleting it from my ID with Home Affairs. Tonateni is my second name and its meaning is lovely, I always think it represents the true reflection of my personality. Tonateni is an Oshiwambo name which literally mean open your eyes in plural. So in my language when you are telling more than one person to open their eyes you say tonateni, but if it is only one then you can say tonata. Some people call me Tonata and I hate it.
With regard to my surname Shidhudhu, it is one of the unique surnames we have in our lifetime. Any person that you will find in Namibia with such a surname should be my relative. But it is actually a nickname which was given to my great-grand father who lived at Ontananga in the early 1900’s. His really name was Shipanga and that was supposed to be our surname today. Tatekulu Shipanga was apparently a vicious man, I don’t really know how vicious or violent he was, but stories had it that his actions landed him a nickname which became popular and is now being carried on from one generation to another. So Shidhudhu literally mean vicious, unfortunately or fortunately it does not necessarily describe the true personality of our generation.

Many thanks Mr. Shidhidhu for your time and deep insight. Tonateni with his mother and a cousin at home in 2003