Kashindi: 1. Welcome Dr. Musukubili to the show, I am very pleased that you have taken time off your busy schedule to participate in Namambe 2014 and for that matter this is our first interview. Please tell us about yourself. It’s my pleasure and privilege to be interviewed by Namambe. I was born in 1974 […] 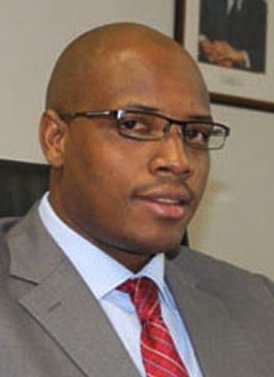 1. Welcome Dr. Musukubili to the show, I am very pleased that you have taken time off your busy schedule to participate in Namambe 2014 and for that matter this is our first interview.
Please tell us about yourself.

It’s my pleasure and privilege to be interviewed by Namambe. I was born in 1974 at Sangwali village in the current Zambezi Region. I’m a muyeyi by tribe, single and a father of two boys. In my family I am the 4th of the 7 children of the late Dickson Tatelo Musukubili and Ms Muyanaro Musukubili. My parents were subsistence farmers up to they passed on. I’m a Christian and I love reading a lot of spiritual motivational books. Politically, am a member of the SWAPO Party since I become politically conscious in 1989.

This was attributed by the fact that I have two brothers who were in exile. When I learnt of their coming back, I become even more extremely active. I remember very well during the tense atmosphere that prevailed in 1989, I had the courage to be the first youngster to host a SWAPO flag on top of my traditional house to welcome my two brothers and to demonstrate our support for the party and their return. Since then I have been a card carrying member of the party. Socially, I associate very well with my peers and colleagues. I’m also an active member of the Mayeyi tribal authority council structures in an advisory capacity.

On a professional level, am currently a deputy director for Labour Inspectorate in the Ministry of Labour and Social Welfare. I also lecture part-time at the University of Namibia in the Faculty of Law. Further, I’m an appointed external examiner for the Nelson Mandela Metropolitan University (NMMU), in South Africa, where I studied.  I’m also a member of  the advisory committee for the Harold Pupkewitz Polytechnic Business School.

2. I am interested to hear about your education background from primary to university?

I started my primary school at Sangwali school in the then Caprivi Region, the Current Zambezi in 1981. I remained at Sangwali from grade1 to grade 11 in 1991. In 1992 I moved to Mavuluma Secondary School, in Katima Mulilo  to do my Matric. I was of course one of the top leaners at Mavuluma school having passed grade 12 in 1992 with very good symbols.

For financial reasons, I only managed to register with the Polytechnic of Namibia in 1996 when I enrolled for a National Diploma in Police Science. I completed the diploma in 1998 and was the best student in the program for the consecutively years of my study.  In 2001, I enrolled for a one year Postgraduate Diploma in Labour Law with the University of Namibia, which I obtained with distinction. In 2003/04 I enrolled for the LLB degree with Unam, but could not complete the degree, because I had to relocate from Windhoek to Walvis Bay where i took up new job in the fishing sector.

2004-06 I enrolled for a Bachelor’s degree with the University of South Africa (UNISA) and obtained in October 2006. In 2007, I was admitted and enrolled for a Master’s Degree in Labour Law at the Nelson Mandela Metropolitan University (NMMU) and was obtained in April 2009. I was motivated to pursue doctoral studies by my master’s treatise supervisor. Moreover, after completing the masters degree, I discovered that Namibia lacked specialization skills in labour law. In addition to the skills shortage, I equally discovered the inadequate availability of labour law literature in the country. For these reasons, I was motivated to undertake the LLD studies to be one of the specialists in this area of study and to create new knowledge in Labour. In 2010, I registered for the doctorate degree in Labour Law and 2011, I was awarded a government scholarship and went to take residence studies up to 2013 when I completed the degree. I’m currently completing my aborted LLB degree with Unisa to complete and complement my career thread.

3. What inspired you to take education to the highest level and what have been your main challenges?

Given my poor background, I decided to break all odds of poverty through education. I was motivated by educated families to be like them or even better. As I progressed through my tertiary education, I was motivated by other academics, particularly during graduation ceremonies when other graduates wear red gowns. The truth of the matter is that there’s nothing you can’t accomplish if: you clearly decide what it is that you’re absolutely committed to achieving.  You’re willing to take massive action. You notice what working or not. You continue to change your approach until you achieve what you want, using whatever life gives you along the way- Anthony Robbins.So indeed the future belongs to those who believe in the beauty of their dreams.
Attaining all my qualifications was not an easy road. In most cases, I worked and studied at the same time. So I had to divide between my working life, social life and academic life to be able to realize my goals. It was therefore very challenging.

In fact I have more than one role model.  My father was my prime role model up to until his passing on in 1999. To this day, his wisdom echoes in my life. He was able to raise us and influenced us to pursue education even when he had no means to support us, except using the proceeds from the subsistence farming. He persuaded us to take education seriously so that we could be better persons one day when he is long gone.
On a political note, obviously it’s the founding father for his unwavering determination to liberate Namibia and his love for education. The late Nelson Mandela is another role model for me.

5. What was the topic of your PhD thesis and if we would like to read it where can we find it?
“Towards and efficient Namibian labour dispute resolution system:  A compliance with international labour standards and a comparison with the South African system”

Ideally, disputes should be resolved at conciliation level, resulting in the minority of disputes being referred to arbitration or the Labour Court. However, it has been established that there are gaps between the legal framework regulating labour dispute resolution and the application of laws and regulations in practice, making the attainment of effective and efficient labour dispute resolution difficult. For this reason, several remedial interventions are proposed that look to the future and the continued provision of fast, effective and user-friendly ADR services.

6. If you are given power to change something relating to labour and social welfare in Namibia what would it be and why?

In fact my studies suggest change of our labour legislation in many respects and a further change of the current labour dispute prevention and resolutions. The current dispute resolution system is neither efficient nor effective. Labour disputes take long to be resolved and even if they are resolved, the mechanisms to enforce the outcomes are very cumbersome for an ordinary employee. I would definitely change our labour dispute resolution system for in order to be responsive to the needs of our society. In respect to social welfare, any change to the system of payment and practices requires political intervention. It is imperative therefore I influence our political leadership to consider annually gradual increase on old age grants to meet the beneficiaries’ current cost of living. Administratively, I will initiative an improvement of the practices and payment system and an increase in pay-points to minimise distances travelled by our senior citizens.
.
7. In your own opinions, do you think Vision 2030 is achievable?

Yes, I think so. With the right resources and skills to drive the cause of Vision 2013, we should be able to achieve the goals of Vision 2030. Becoming an industrialized country requires competent skills to complement technological capacity. Therefore, as country, we should continue to invest in education to be able to realize the goals vision 2013.

8. How would you describe the general understanding of labour law by the majority of the workers in Namibia?

The new Labour Act no 11 of 2007, is still very complex for the ordinary workers. As such we have tried to translate the provisions in various indigenous languages. But still the comprehension level is very low, resulting in disputes over trivial differences at the workplace.  More must still be done to create wider conception of the labour legislation, particularly, in respect to the duties, rights and obligations of the parties arising from the employment relationship.

9. What was your most exciting moment in life?

The most exciting moment in my life was when I graduated and awarded a doctorate in law (Labour Law) it’s a moment I will never forget. It earned my title of doctor.

Yes, it’s to encourage them to take up education serious. As stated earlier, education is the key to unlock the future. With education one acquires the power to influence decisions and thereby contributing meaningfully to the development of our country.  Our youth should know that academic challenges are but temporal. Perseverance, determination and self-discipline are the best prescription to success. The youth must cherish their dreams and their visions as they are the children of their souls; the blue print of their ultimate achievements.

11. If you are given a donation of 1 million dollars how are you going to spend it?

I will invest the money in education particularly for my society, the Mayeyi People. Currently is there is a very low level of education among my community. As a community we need to be part of the greater society of scholars in Namibia and be part of the rare skills that Namibia is lacking such science and medicine and other relevant fields of study to be able to contribute to the future development of our country. The remainder of the million I will invest research capacity.

As an academic, I would like to continue creating knowledge most particularly in the field of labour. You will notice that we have very little Namibian labour literature/ materials available. We depend mostly on the South African books. It’s my cause to make a difference and to continue researching and publish as many Namibian Labour books as possible. I hoping that doing so, will create wide spectrum of knowledge on Namibian Labour legislation and practices. I should state that everyone want progress in life,  with my research and publication I hope to contribute to the knowledge base of Namibia and possibly earn entrance at one of our institutions of higher learning such as UNAM or Polytechnic of Namibia or work for any international organisation such the SADC, AU or ILO, if not able to get  proper placement in Namibia.

13. How can you be contacted by people who want to interact with you on issues that you have touched on in this interview?