Kashindi: 1. Hi John Welcome to Namambe. Your name sounds European do you perhaps have an African name/traditional name on top of John. Good day to you Mr. Kashindi. I m John Natangwe Alweendo Kanyangela. I would prefer to be called Kanyangela John Allu, because traditional names are sometimes prohibited to be shouted everywhere. 2. […] 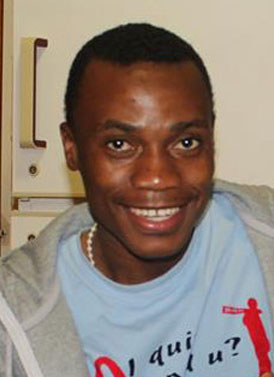 1. Hi John Welcome to Namambe. Your name sounds European do you perhaps have an African name/traditional name on top of John.

Good day to you Mr. Kashindi. I m John Natangwe Alweendo Kanyangela. I would prefer to be called Kanyangela John Allu, because traditional names are sometimes prohibited to be shouted everywhere.

2. Very good, now I want to know who is John Kanyangela?

In brief, II was born by my two biological parents in 1992, August 16, Outapi Hospital. Our home village is Oupembe whose headman is tatekulu Nangolo Sergius Lyashaama Kanyangela (in fact he is my grandfather, sadly he passed on early this year). My parents are Mr Isidor Ipandeni Kanyangela and Mrs Balbina Nangombe Rudolf- Kanyangela. I stay with them and the raised me very well in the same village of Oupembe, although sometimes I use to go for holiday to my Grandparents at Onelago (Ouhwaala village). My parents trained me how to do traditional chores which can be done by both boys and girls. It was becuase of their double training I was able to pounding mahangu, cook Oshifima, , fishing (atu kahuwa eehi momavia noishongo) with traditional fishing basket, prepare the place (oshipale)where mahangu is done after harvest and pound mahangu..

3. Tell us more about your education.

I attended my kindergarden and primary education at Anamulenge primary school (kOlaele). For my senior primary and junior secondary education I went to Okavu Combined School, now called John Alphons Pandeni Combined school. That time my dad was the school principal thus I have to behave very well. I also recall that you were our School Patron that time thus why I respect you too much.

I passed my grade 12 at Nuujoma Secondary School with 31 points and subsequently I was admitted to further my studies at Polytechnic of Namibia which is now called University of Science and Technology (NUST). At this institution I started with my Engineering course but because I was not doing well in Chemistry I failed and then quit the course.

I then changed my course to do Transport Management, therefore if you check my CV closely you will find that I mostly work for Roads Authority even if I ended up employed by Road Fund Administration. Currently I m waiting for my graduation in April and I prefer you also to be there if you will be in Windhoek that time.

4. Mr. Kanyangela do you think you are a a type of job seeker or employment creator?
A job seeker.

Onguvi Trading is a registered company just like Okampini Production and other corporate companies. For your information almost everything that you see for Onguvi Trading from the logos, business cards, advertising posters, that big poster you see in Outapi, their facebook page etc.I have been designed by myself.
I m the Promoter of Onguvi Trading and the owner of Okampini Production. Onguvi Trading is resposible for manufacturing precast for boundary walls or rooms and install them. By doing so Onguvi Trading is preventing and avoid deforestation which is the cutting down of trees in a large quantities; the destruction of forests by people and this mostly leads to desertification.
To have a desert country is not good at all as this leads to complete poverty and death. Onguvi Trading helps the community in many different ways
1. It avoids deforestation which leads to desertification as said earlier.
2. Once a house has a boundary wall made of precast chickens won’t be able to get out to go and eat mahangu crops especially when they are small.
3. snakes hardly enter hoouses with boundary wall.

Finally Onguvi Trading precast are very strong and removable in case someone wants to move his/her house. The precasts can be manuctured on site or in a nearyby town of a client.
If someone wants his/her house to be built with precast first he or she should give us the measurements in order to give him a preliminary quote, later on we will visit the house to ensure that the measurements are correct before we prepare the final quote. Clients would be required to pay a deposit before work starts.

6. What would you like to achieve in the next 5 years.

I want to create employment and run a company and also be a board member of some companies which have interest in what I m really trying to do.

7. If you become the next Namibia president, what are you going to change that we have not heard before?

I don’t want to become a president because I am not good in politics, but for argument’ sake if I become the president of Namibia I will fight against cases of self enrichment and try to give land to Namibians. Most of us want to run business but we will go nowhere without land.

8. Is there something that concern you about our youth?

Our youth need land to prosper.

9. Where else did you travel so far?

Only SA so far.

10. Now tell us more about Okampini production because observed that you are very about it.

Okampini Production was established in 2008 during that long holiday after I was done with my grade ten exams while waiting for results. As I already told you that when I went to Nuuyoma secondary school I joined CLG because I like singing too much. My first album was titled I-QUIT and now I m very busy with the second album under the name Questing After Truth. We are now in the good process of finding extra income to do many activities. For more information about Okampini people can log onto our website: http://okampini-production.webs.com/

11. Do you regret about anything in your life so far.

Not really but I feel very bad when I want to achieve something but there is no money to help me doing it. I found out that Namibia has many talented people but the main problem is access to finance. Some people when they look at me they think I have millions on my accounts but to say the truth I just working hard to get money in order to grow my business make my supporters happy by making competitions in order to maintain our customers as you can see from our website..

Except from my parents. My role model is Satlam. This guy to me is just good in everything that he is doing. He is an artist who is very straight forward in whatever he is doing or singing. He likes people, he likes jokes, he is very friendly but when it comes to serious matters he is a serious man. That is also how I am. I m friendly, I like my fans, I like jokes and mostly if you find me home in the north you will won’t believe that this is the guy who is a musician for Okampini Production. You will find me cooking poikalungu as I was raised by my parents, you will find me pounding mahangu etc.

13. At what age would you like to retire from active employment?

That will depend on the type of job I m doing, the wage I get, dependent I have, properties I am managing therefore for now I cannot really give exact answer except for the normal age retirements.

14. If you are asked to relocate somewhere in the world where will you go.

Me I just want to stay a Namibian nationality and I m a proud to be a Namibian. Unless I will go to SA to further my study.

15. In your view what makes alcohol enticing for today’s youth in Namibia?

Alcohol does not entice me, I don’t drink alcohol at all some use to say I am born again. Namibian youth oye hole okwiitala ko and mostly if you go at a bar and you buy a cool drink they buy a table full of alcohol and regard you who is drinking a cool drink or taking only one beer as a coward even if they don’t really know what you owns which they don’t have..

16. Do you perhaps have any advice for school going children about the danger of sex?

Sex is very dangerous as it disturbs school learners mind and they will end up failing or reducing their performance rate. Therefore I advise school learners to stay away from dating until they finish with their education. They should avoid using cell phones while they are going to schools.

As is already know by the orders of catholic church cell phones are not allowed in church. So after church the business man by nature when switched on his phone call where coming in after one another like as MTC server on the valentine days use to be.

As a man you have to die trying in order to be called a warrior, don’t die doing nothing
because they will call you a coward. He you can see that Mr Kampini is doing his Okampini
Production part-time job after knocked off from his normal duty. Did you think he did any IT course?
This is what is called a miracle technician, and mostly people argue that he did IT just due to the service he provides.

Time is money and do you think money is time as well. Always if you want to be a
true business man you have to work with time not to disappoints your customers and
to provide Tate Butie’s customer service.