Kashindi: 1. Tell us a little about yourself? I am Ruben Shaanika Kanime born and grew up in a marginalized village known as Omalyadhila-Oshihau withinUukolonkadhi.  Im a son and last-born of Mr. Johannes Kanime (Traditional council) and Mrs. Tuwiilika Nekulu Panduleni Mateus. Growing up in the village, ours was to do chores like looking after […] 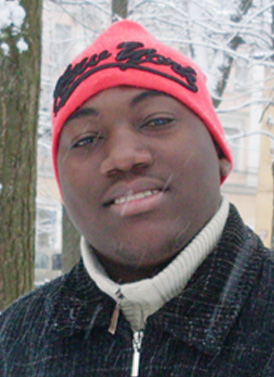 1. Tell us a little about yourself?
I am Ruben Shaanika Kanime born and grew up in a marginalized village known as Omalyadhila-Oshihau withinUukolonkadhi.  Im a son and last-born of Mr. Johannes Kanime (Traditional council) and Mrs. Tuwiilika Nekulu Panduleni Mateus. Growing up in the village, ours was to do chores like looking after livestock, cultivation of land, building traditional huts and digging wells during the dry season. On Sundays we did attend church-services to praise our lord and during free time we did go for hunting, which traditionally is regarded to be one of the characters of a real man.

3. What are you doing at the moment?
2004, I joined the Polytechnic of Namibia as an Engineering student; however, professionally I was not born to be an engineer, it so happened because of competitions and gaps between several parts of the globe. Hence in second semester of the year I forsook engineering for the study of medicine as my learning capabilities granted me a great chance of studying overseas. October the 7th, 2004. I left Namibia for my study in the Russian federation.

As I am engaged in this valuable communication with you Mr. Kashindi, I am equally viewing the finish line of my tough journey of becoming a Medical Doctor. In other words, I am preparing for my state examination scheduled for June 2012 and then I will call it a journey well-walked. Beside my study, I am writing a book titled A story behind him, son of the Namibian soil. I am writing this book to share my life experiences, which I believe is a true testimony of the fact that; sweat comes first before sweet not just in dictionaries, but in real life as well. My book is a cultural tool to uphold legacy of those who have inspired us, those who defined us and those who have shown us our common humanity.
I am also a member of a group known as Omwifi Legends Group. It is a well-known fact that the majority of our community remains below the breadline, with young blood dropping out or failing school and becomes active participants in uncivilized, destructive activities such as alcohol abuse, stock-theft, robberies and murders. It is equally worth mentioning about HIV/AIDs which spread at an alarming rate recently. It was this sad story, which forced me and other former learners of Omwifi combined school to form the above mentioned group in February 23, 2011. Our group is non-profit and rural-based, open to all members of our villages who feels and understand the importance to join hands in combating challenges facing us as a community. So Mr.Kashindi, part of my time goes to the activities of this group which is still developing into a well-structured and functioning body.

4. How did you come across Namtranslations?
Last year in Moscow, while meeting H.E President Pohamba in my capacity as a Vice-President of the Union of Namibian students in Russian Federation (NAMsurf), I came across a tall man, who was so curious to know me well, because of my Surname apparently. I still recall his question when we geared up for an informative dialogue; he asked Have you ever heard of Kaizer or Kotokeni? I replied politely, NO. He then went on talking of my parents, brothers and sisters. Since then, I kept contact with Mr.Shikongo Titus and it was through him that I came to know this important site.

5. What would you like to share with other Namibians at home?
Good question Mr.Kashindi! My answer to this question is simple and comprehensive: I want to share anything and everything that I picked up during my travellings and time in Russia. However, people differ in characters and interests, this apply also to what exactly this person and that person want to hear from me. For now, I can only urge Namibians, more especially youth to work hard and harder in all endeavors. Every day lost in moving forward towards a developed Namibia makes more imminent the spectre of further poverty, unemployment and crimes in our country. If life is to be sustained in Namibia, hope must remain even where confidence is wounded and trust impaired. We must stop looking down to ourselves and start looking up to where we want to be; Success in life comes not from holding a good hand but in playing a poor hand well.

6. Any other thing that you want to say in general?
Let me grab this opportunity to acknowledge your efforts and that of others involved in setting up this constructive site. I further dedicate my words of acknowledgement to your personal life journey, characterized by success, success and again success! Let us remain focused on a bigger picture.

Many thanks Ruben and Good Luck with your studies